Well the day started with a great ride, Diane showed me where she used to live. We thought we would pick out a side road and venture out. All the way kept thanking and hearing the adventure camp instructors in our head as we hit some loose sand then crossed a creek which we would never have done before this trip. Then back from a gold mining area we veered off the path agin, we were getting tired but didn’t really realize it until came to a very technical hill which Diane made it up and I choose to hit the ditch as it was either that or the bush.

Got the bike upright and decided to head back and as we hit a creek or if in Saskatchewan a river I veered to the left which was not the best way to go and ended up under the water, once again got it upright and made it out only wet and not hurt,actually we both enjoyed it as we put to use what we were taught and never would have attempted before. 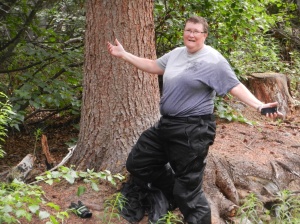 Now the big job is drying out the boots but probably won’t happen anytime soon. Enjoyed a great burger barbecued by Robert and settling for the night with a beer in hand. Still think it is strange as after 10 pm and totally light out. Will see what tomorrow brings. 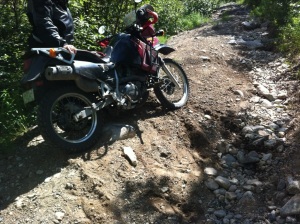