Last night a European tour bus came into the camp ground. It holds about 24 people and is a self contained touring unit. The people sleep in little cubbies that take the back half of the bus. They seemed to be enjoying it, but I think I would be a bit claustrophobic if I had to sleep in one, as they seem a bit tomb-like to me. 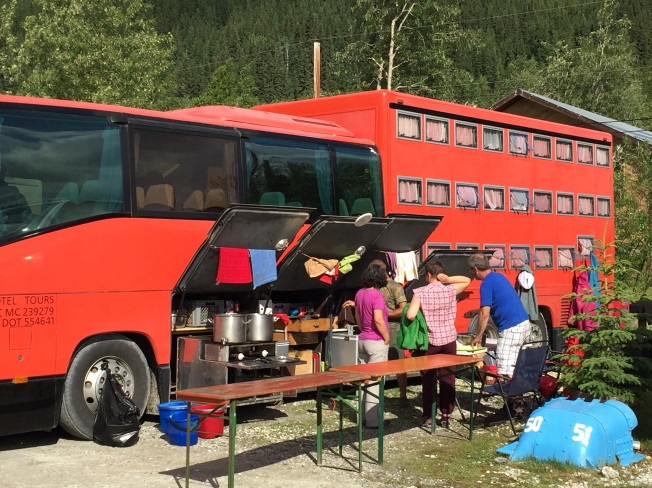 We woke to more rain, coming down pretty hard. So, we had a nice hot shower to warm up and, in the bathroom, ran into Melissa, an old friend from Whitehorse that I had done the Chilkoot Trail with about 15 years ago. It was really great to see her and catch up a little.

As it was a kind of crappy morning, we decided to have breakfast out for the first time since we started the trip. We headed off to the Alchemy Café, a funky little restaurant in a log building. Linda had a cappuccino (her fave) and homemade granola with yogurt and a fruit compote, ii have the Black Bean bowl with eggs, beans, rice, goat cheese and pickled cabbage, along with a turmeric latte. We were both very happy with our choices. I would absolutely go back there if we ever get back to Dawson. The whole menu was vegetarian, only cheese and eggs, no meat. And all very healthy, and tasty options.

We had a window table and watched a couple of very wet riders having coffee outside under the roof overhang. Again we were thankful for the car instead of the bikes.

By evening the rain had stopped ad we went to the Dust 2 Dawson bike games. We have been to bike games before, but these were a whole new level of challenging. There was the requisite slow-ride, the winner was able to balance his bike while it was stopped, so there was no hope for the rest. It was quite something to see. There was also the standard, passenger-eat-a-wiener-hanging-from-a-string game. Honesty not my favorite. The next one was pretty wild. A hood is placed over the rider’s helmet, so that they can not see anything. They then ride until the crowd yells stop, trying to ride in a straight line, and land with their front tire on a paper plate. That has to be unnerving. Next was slow riding, while trying to drop tennis balls into progressively smaller tubes, about 1 foot off the ground. Definitely a challenging event, no one got all the tubes, most got one or 2, the winner had 4. We heard that the 2 riders who won all but the wiener event were professional riders, so they were great watch, but it would have sucked to be competing against them.

After the bike games, it was back to Gerties. This time we got to spend a couple hours at the tables without donating any cash other than what we spent on beverages. It is always a good night at the casino when you walk out with the same amount you went in with.

It was supposed to be an early night but ended up being after midnight. The problem with all this daylight is that you really don’t have any sense what time it is.