Day 3 we managed to sleep in a wee bit. In the middle of the night the flies went somewhere to sleep, alas they were back in the morning and brought some friends with them. It really did require some effort to make myself believe that they were on the outside of the tent (which they were) when I could see them so plainly through the screened tent peak.

Today we shared the duties of striking camp, had a cold brekkie and headed out for Whitehorse. There is a herd of bison that live in the area around the hot springs and we hoped to see some along the way. As we were traveling down the highway, there was a car stopped on the side of the road. By the time we could see what they were stopped for it was too late to hit the breaks for a photo op. There was a bison rolling in a sand/dust pit on the side of the road. It is unusual to see just one bison and as we continued down the road we were hoping that this wasn’t the only one of the herd that had come to the roadside.

We weren’t to be disappointed. 10 minutes down the road traffic was stopped as a large herd made its way across the highway. Although bison can move pretty quickly when they have a reason to, they usually saunter along which is exactly how they were crossing the road. Since they were taking their time, we were able to take quite a lot of pics.

The Alaska Highway does a bit of dipsy-doodling between BC and Yukon. The first foray into Yukon at mile 565 barely has any signage. I suppose that is because you only stay there for a few minutes then your back in BC. The official sign comes a bit later, shortly before you get to Watson Lake. Just before Watson Lake is what used to be Contact Creek Lodge. It is no longer a lodge, but they do have fuel with better prices than Watson Lake. They also have soft serve ice cream, which was the worst ice cream that Linda had ever had.

Watson Lake was our next stop at its famous sign-post forest. The “forest” was started in 1942 by a US soldier who was working on the Alaska highway put up a sign with the name of his home town and the distance to it. Since then it has grown to over 78,000 signs and visitors are welcome to add their own signs to it. We even saw a Manx sign, which made me smile (and snap a pic) 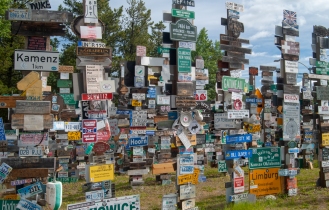 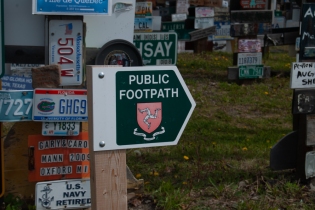 While we were stopped at the forest, Linda spoke to a couple of guys on adventure bikes, one of whom had flown his bike over from Bahrain. They had originally planned to ride to Tuk, but stories of serious accidents involving adventure bikes on the final section of the road had them change their plans and instead they will go to Prudhoe Bay Alaska. So, perhaps the Universe was telling us something when so many obstacles seemed to block us from the original plan of doing this trip on bikes. Since the point of this trip was to get to Tuk, a bucket list item for me, having to turn back because of bad road would have been devastating. Better to do it in a car and actually get there.

We stopped for lunch at a rest area at Rancharia Falls. Really, it is awful that I have likely driven past this 20 times or more and have never stopped. The walking path to the falls is made to be accessible, and at the end there is boardwalk so that you can get a nice view of both sides of these falls. No, they are no Niagra, but they are very pretty none the less.

In Whitehorse we were able to very briefly connect with friends Moosh and Richard as they headed out of town with their family and left us with the use of their house. Tomorrow we will get a couple quick visits with friends. It’s great to be back.