We woke up quite refreshed, enjoyed another shower. What a luxury! We needed to pick up a couple of groceries and ice for the beer, then grabbed a quick bite to go at Cheechako’s Bake Shop on Front St. It was fast, tasty, and inexpensive.

We had considered taking the highway to Keno, an old silver mining town, as I had never been there and would like to see it. But surprisingly it was overcast and rainy, so we just stayed on the Klondike highway and continued south. We didn’t have time to take the little hike down to the 5-finger rapids on our way up, so we stopped around 1:30 at the Tatchun Creek Campground, which is only a few kms up the highway from the rapids viewpoint. We would hike down the tomorrow. Because we stopped early, most of the sites were open and we found a nice one by the creek. It was sunny when we set up camp, so we had an opportunity to dry out all our gear.

The next morning had a hot breakfast, struck camp and headed over to the 5-finger rapids viewpoint. While we were in Dawson City we had picked up a copy of the Yukon New, a Whitehorse newspaper. In it we had discovered that the Yukon River Quest had started on Jun 27th. The River Quest is the worlds longest annual canoe and kayak race and goes 715km on the Yukon River from Whitehorse to Dawson City. The race started out as a fund raiser for the Yukon Quest dog race, but quickly became an international event of its own. The teams all have a mandatory 7 hour stop in Carmacks, which is just a little bit upriver from the rapids, so we had hoped we might still be able to catch a few of the boats.

We took the stairs from the viewpoint then hiked down the trail to get a closer view of the rapids. If there were any boats left, they would most likely be going through the closest channel which would not be visible from up above. And even if we had missed them all, I still wanted some pics of the “fingers”. 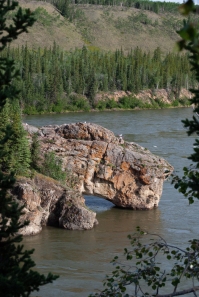 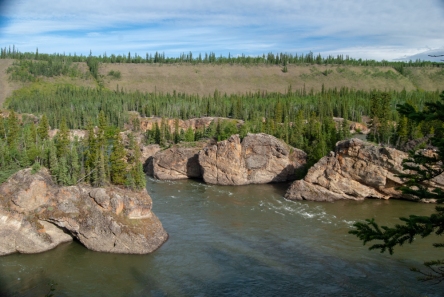 We were in luck, the safety boat was still there so that meant that there must still be at least one more boat. We ended up seeing 4 teams go by, which was a nice unplanned experience. 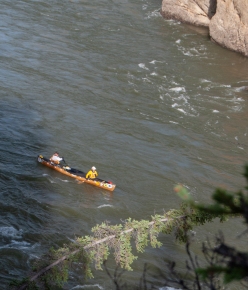 We stopped in Whitehorse for some supplies, and again had trouble finding fuel canisters for the stove. I knew we would not be able to find the canisters in the arctic, but they used to be available through the Yukon, so this lack of availability was unexpected. If we do another long trip we will have to look at one of the multi-fuel stoves. For now, we picked up a propane camp stove that was on sale at Canadian Tire. We already have one at home, but we figure we can sell this one once we get back. And, we won’t have to worry about running out of fuel.

We grabbed gas and supplies we headed out to Marsh Lake Campground about 30 minutes south of Whitehorse, just off the Alaska Highway.  It is one of the largest Territorial campgrounds, but also one of the busiest. It would be our home for the next 3 nights. We were glad we were getting there early, particularly on a long weekend. If we wouldn’t find a site, we did have a couple of friends who had grabbed sites the day before. We ended up finding one that was mid-way between them both, so it worked out really well. Linda is still amazed at the government campgrounds in the Yukon. They are all $12 a night, and all have pit toilets that are kept clean and stocked, and all of them have free firewood. The firewood is often split, though you still need an axe to break it down a bit more. Down south $12 doesn’t even buy you a bag of firewood at a campsite, let alone pay for a site.

Once we got set up we head back towards Whitehorse, to the Carcross cut off. Our friend BJ MacLean was playing at the Cut Off Restaurant, so we were going to have dinner and listen to BJ and Kietha Clark. The music was great, as usual. It does our souls good to hear BJs music, and even more so live. We also had an opportunity to visit with some other old friends which was an added bonus. 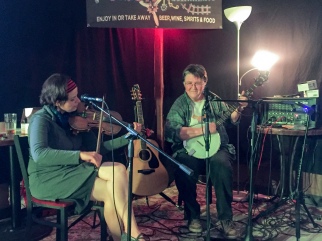 After the show it was back to the campground for a bonfire, beverages, and catching up with old friends.

We had to run into town the next day to take care of some paperwork from down south and made use of McDs wifi. Then back to the campground for dinner and another bonfire. A few friends came out from town, and we had a great evening of music and laughter, sheltered from the rain by a massive tarp strung over the fire pit. A late-night snack of peaches, marshmallows and hotdog buns toasted over the fire in pie-irons rounded off the night. While heading back to the tent for the night, I saw the moon through the clouds and had to go sit on the bluff and watch it for a while. 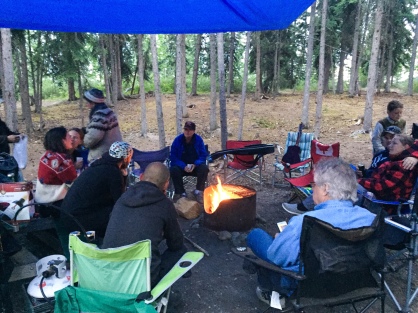 The next morning, we woke up to discover that the cooler, which was plugged into the 12v socket in the car, had completely drained the battery. I was sure it turned off a while after the car was locked, but I was wrong. We had a booster pack with us. It usually has enough juice to jump 20+ vehicles, but we almost drained it getting the car going. But it did start, of which I was thankful, as Linda was giving me the I-told-you-so look.

Some of our friends had gone to the Marsh Lake community centre for Canada Day celebrations. There was a parade, music, and a free BBQ. We opted for a lazy day hanging around camp and watching a movie in bed.

There was another campfire in the evening, with some different friends popping out for a bit. More music and more bevies, but an early night for us tonight as we played a little to hard the night before.