It was still raining hard and was cold when we got up early. We had planned to stay for 2 nights and do a day hike today, but not in the rain. So, for the first time this trip we had to pack in the rain. Tent and shelter went into the back of the car soaking wet. We hoped that we would find a site to set up early enough in the day for things to dry out before we had to go to bed. We didn’t even want to make breakfast. Dawson City was the closest cell service and we had to call about the phone, so we figured we would just have brekkie there.

It is only 90ish km from Tombstone to the end of the Dempster. I have never been so happy to get to the end of a road before. We headed west into Dawson and enjoyed the drive on pavement, it noticeably changed our moods. We had hoped to stop at the Alchemy Café again, but they didn’t open for another hour and I would way to hangry by then, so we went to the Triple J hotel. Linda called Eagle Plains from the restaurant to ask about the phone. Yes, it was there. Yay! Can they ship it? No, there is no postal or courier service there. She would have to send it with a customer who was heading for Dawson, and would call us if she could find one. Great! But, that would mean we have to stay in Dawson for the night as she also told us the weather on the Dempster was “horrendous” and if she found someone it would take them a long time to get there. So we booked a room at the hotel, there wasn’t one available that early in the day, but should be by noon. About 10 minutes later, Eagle Plains called to say that Elvis is bringing my phone to Dawson.  We let the front desk know that someone would be dropping off a phone for us then went to the museum to pass the time while we waited for a room.

The museum has some very good displays showing the history of Dawson, the gold rush and placer mining. I was able to show Linda the route of the Percy DeWolfe memorial mail dogsled race that I did many moons ago. The 320km race honours Percy DeWolfe who, from 1910 – 1949, delivered the mail between Eagle Alaska and Dawson City by boat, dog team and horse. The museum also has a room of of displayed artifacts behind glass on shelves, so though there is little in the way of descriptions for them, they are very neat to see. Definitely $9 well spent. Fun fact: The museum also serves as the courthouse every couple of months.

We got back to the hotel at noon and the room was indeed ready. We both needed a hot shower and were looking forward to a warm soft bed for the night. The hotel even had a free washer and dryer for us to use. So, we took the opportunity to de-stink ourselves and our clothes. Linda also made a new friend in the stairwell.

The car was in desperate need of a bath, having a nicely textured coating of Dempster mud on it. So we found a wand wash on the out skirts of town.

On the way back to town we headed up the Dome Road. We didn’t get the chance to do this last week as it was raining the day we were going to hike up, so I was glad we had another opportunity. From the top of the dome you can see most of Dawson City, and can look down the Yukon River valley.  It really is a great view.

We also took a stroll around, looking at many of the historic buildings and displays that are spread across the town. The SS Keno, a sister of the SS Klondike in Whitehorse, sits on the waterfront and is operated by parks Canada. In fact the whole town is a National Heritage Site, and has very strict roles on development. The benches along one of the streets were built to look like old shipping crates, very cool. 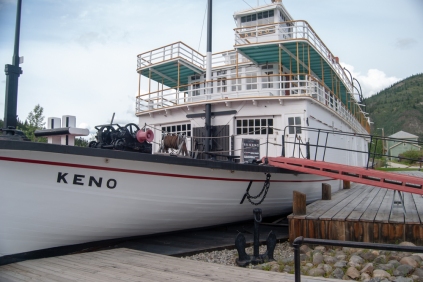 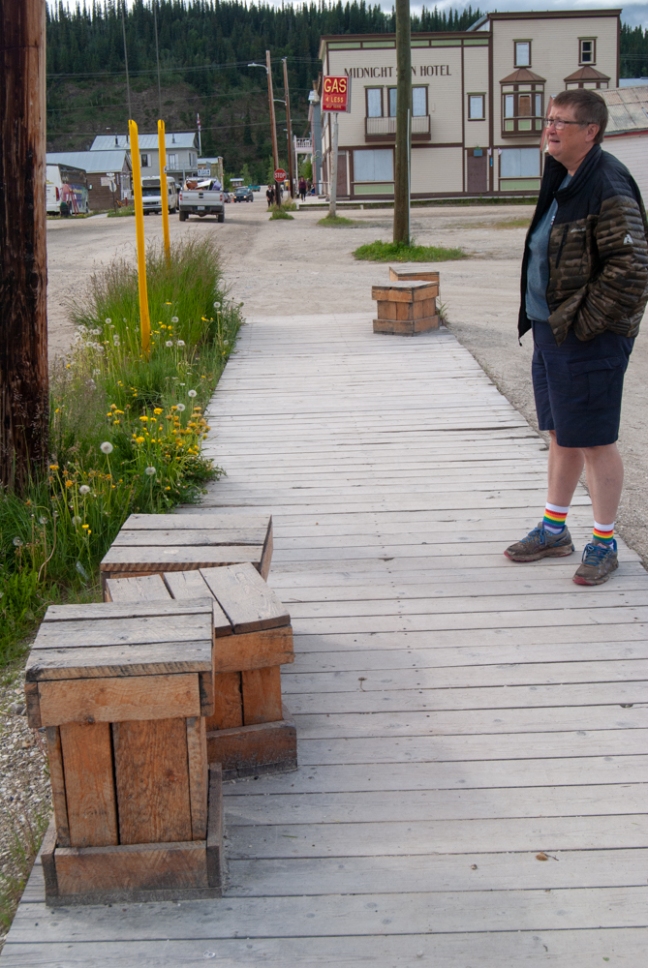 Klondike Kates used to be the go to place for brunch when I worked in Dawson years ago but we discovered last week that they no longer do brunch, only supper. We had heard that the food was still amazing, so decided to go there for supper.. It was raining when we got there, and it was a 20-minute wait for a table. There are benches outside for people who are waiting, but they are not covered. So everyone who was waiting huddled under the awning on one of the heritage display building across the street. The restaurant would yell over who was up next.

The wait was worth it though. Linda had the daily special of tourtiere, a good choice in a restaurant that has real Quebec curd on its poutine. It smelled amazing and tasted even better. I had the sausage plate, which had a Bison/blueberry sausage and an Elk/cranberry sausage. We were both very happy with the food and would recommend this place to anyone. They strive for locally sourced and scratch made food.

We had intended to go to the Westminster Hotel bar last week but got way-laid somewhere along the way. We had the time tonight, so headed over for a beverage. The Westminster is a Dawson City icon, referred to as “The Pit” likely because of its condition, though I stand to be corrected on that, and the “Pink Palace” in reference to its exterior colour. The floor is so uneven that even sober people look like drunken sailors as they walk across it. The décor is rather interesting, with a few risqué paintings on the walls. It certainly gives you a bit of the colour of Dawson City.

Diamond Tooth Gertie’s Casino is right across the street from the Triple J hotel where we were staying. So, just for something different we popped in to play the tables a bit. This time however, we ended up coming out with more than we went in. Always a good day at the casino when you can do that. Sorry Klondike Visitors Association, we took back most of what we donated last week.

We knew enough to quit while we were ahead, called it an early night and enjoyed the warm soft bed. We both slept like logs.

PS: I thought I should include a pic of a Tuk-U shirt. In my mind everyone would know what I was talking about, but Linda was surprised when she saw it. 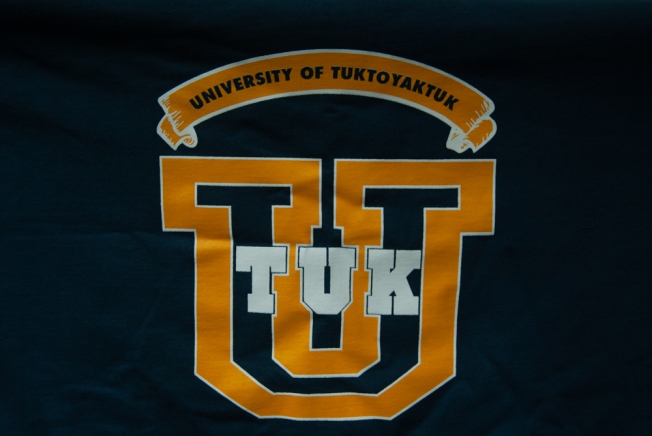